Saint Benedict and His Rule

According to the Dialogues of Pope Saint Gregory the Great, Saint Benedict was born to a noble family in a small village high in the 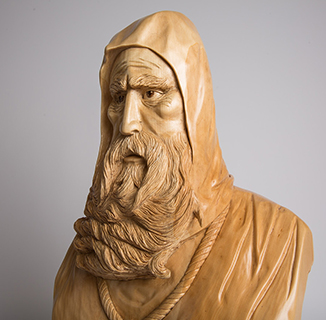 mountains of Nursia, a province located 100 miles northeast of Rome. Sent to Rome for classical studies as a young man, Benedict found that the godless lifestyle of his classmates was too distracting for his taste. Fearing that he too would become acquainted with their vulgar behavior, Benedict fled Rome to serve God alone. Journeying 50 miles east of Rome, Benedict did not return to the wealth and comfort of his father’s house. Rather, for three years he chose to live as a hermit in the caves of Subiaco. This solitude, however, was short-lived.

Soon the holy-man was discovered by a group of wayward monks who prevailed upon him to become their Abbot. As Benedict had predicted, the lukewarm monks found his regime to be too severe, so they plotted to poison him. Gregory the Great recounts the story of Benedict’s rescue; when Benedict blessed the poisoned glass of wine with the Sign of the Cross, the glass shattered into many pieces. Perceiving this evil attack on his life, Benedict left these wayward and undisciplined monks in order to establish a new monastery.

Journeying southeast to Monte Cassino, Benedict destroyed a pagan temple dedicated to Apollo, and upon its ruins built the monastery of Monte Cassino. It was here that the holy man of God would go on to write the foundational Rule for monastic life, a Rule which continues to be relevant and essential for monks throughout the world even to this day. Benedict spent the rest of his life at this monastery and when he had sensed that his days were coming to an end, he desired to praise God one last time. As his brother monks supported his tired body, Benedict took his last breath as he stood with his hands raised in praise of God.

The Rule of Saint Benedict

Written in the sixth century for a diverse group of monks, the Rule contains guidelines for holiness that are equally relevant today as 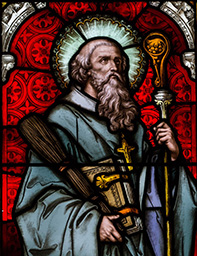 they were 1,500 years ago. In the Rule, Saint Benedict not only instructs his monks in the basic monastic virtues of humility, silence, and obedience, but he also prescribes times for spiritual matters such as communal prayer and meditative reading. Unlike many of the Monastic Rules that preceded his, the Rule of Saint Benedict does not wish to prescribe anything that is too harsh or burdensome. Rather, a monk was to find God in the ordinary and simple circumstances of daily life. For St. Benedict, holiness could be found in a balanced and harmonious life of prayer and work, all in the context of communal living.