This Saturday, March 23, 2019, the community at Newark Abbey/ St. Benedict’s Prep celebrated and gave thanks to God for the 50th Anniversary of Fr. Albert’s Holtz’s Ordination to the priesthood. Below is the text from Fr. Al’s homily at the mass of Thanksgiving for his priesthood. We hope you will find it edifying and uplifting.

I once read a story that at the end of World War II Europe was left with thousands of orphans - babies whose parents had been killed in the war. Doctors, nurses and other caregivers set about trying to help these half-starved children to heal both physically and emotionally. They immediately discovered that a lot of these children couldn’t fall asleep at night. Beside the terrible nightmares, and the frightening memories of pain and separation, it turned out that these little ones, who had almost died of starvation, were terribly afraid of going hungry again. They were haunted by the question: Will there be anything to eat tomorrow? Simply put, they were worried that there wouldn’t be any food the next morning when they woke up.

So, the story goes that one day a nurse got an idea: The next night, as she was tucking the children into bed, she gave each of them a little loaf of bread to hold onto -- and it worked! The little victims of near-starvation fell asleep peacefully, clutching their loaves. That bread was a promise that there would be something to eat tomorrow,

We’re here this morning celebrating, as we do at every Eucharist, the bread of Promise: It’s a special way Jesus has of fulfilling his pledge: “ I will be with you always, until the end of time.”  He gave us the Eucharist with the command:  “Do this in memory of me.”

And so, for almost 2,000 years Christians have been repeating this ritual in which we make present in a mysterious way Christ’s self-sacrificing love. The church keeps faithfully repeating the ritual, keeps making the mystery real again, even in the midst of terrible trials and troubles. Over the centuries the Lord has been with his Church: in the 1,000’s, when Christendom was split down the middle between Easter and Western Churches, or in 15127 when the Protestant Reformation tor western Christendom apart. Through all her trials, the Church kept listening to Christ’s voice encouraging us,

“Trust me, just keep on repeating this ritual, Of my self-giving love, until the next time I come, And so that’s what we do: in faith and trust in God, Christians all around the world keep on gathering around the table just the way we are gathered here this morning: To make Christ present on the altar, to celebrate the bread of promise, and thank the Lord for His gifts. But today we’re celebrating a specific example of God’s loving faithfulness: You’re joining me in thanking God for being faithful to me during 50 years of priestly service. The word Eucharist, after all, means “Thanksgiving.”

Yet there’s a lot more going on here than simply commemorating Christ’s sacrifice, more to it than “giving thanks.” When we come to the banquet and share in the bread, the body and blood of Christ, We are transformed: we become what we receive. The old saying has it, “You are what you eat!” Christ, who has has become our bread on the altar, calls us by this sacrament to love as he loves.

On a 50th anniversary of someone’s priestly ordination we expect to hear the word “vocation,” we automatically think of “priestly vocation” or a “religious vocation” of a nun or a monk. But the rest of you here this morning are not going to get off that easily!

The first line of this morning’s second reading, when Paul says: “I implore you to lead a life worthy of your vocation.”  he’s talking to all the baptized Christians in Ephesus. And he tells them that all of them have the same vocation: He says, “Bear with one another charitably, in complete selflessness, gentleness and patience.”

So, you see, this is NOT a priestly or religious vocation, rather, it’s the vocation of each one of us here this morning. Each of us has a share in this one same vocation. Listen to Paul describe your calling further:

“Do all you can to preserve the unity of the Spirit

by the peace that binds you together.

There is one body, one spirit,

One Lord, one faith, one baptism. One God Father of all …”

He goes on to explain how this works for baptized Christians:

“Each of us has been given his own share of grace,

given as Christ allotted it:

And he gave some as Apostles, others as prophets,

others as evangelists, others as pastors and teachers,”

And now Paul goes on to describe the purpose, the point of our common vocation; listen to this beautiful passage because it’s about you:

“So that the saints together make a unity in the work of service.   for building up the Body of Christ, until we all attain to the unity of faith and knowledge of the Son of God, until we become the perfect Man, fully mature in fullness of Christ himself.”

But not just for one another in our comfortable closed circle. Today, when the human family is being torn apart by the forces of hatred and violence, and splintered almost, it would seem, beyond repair, the world needs us, more than ever, to be bread for one another! More than ever, we, His body the Church, are called to be an example to the world:  called to be a community of love that is always looking outward toward others who may not look like us, who may not sound like us, or think like us.

So, as we celebrate this morning God’s loving faithfulness in supporting me in my vocation, remember that the Lord is supporting you in your vocation as well, which is basically the same vocation as mine: To build up the body of Christ, help bring about the Kingdom on earth.

Please pray with me:

O God of Faithfulness, I thank you for being so wonderfully good to me during fifty years of priestly service; grant that all of my family and friends who are gathered here to celebrate with me, may be strengthened in their vocations as well.  Help us all to continue faithfully being bread for one another and for the whole world. Through Christ Our Lord. Amen.

Also, please follow the link below to a wonderful article on the Festivities by Jules – Roland Gouton, of the Benedict News. 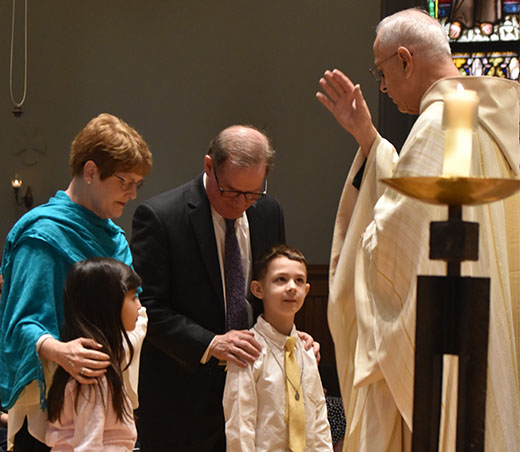