The Entrance of Br. Bruno Mello into the Novitiate Marks an Historic Milestone for the Abbey!
Oct 16 2020

This evening, the 16th of October 2020, Br. Bruno (James) Mello was received into the Novitiate of the Benedictine Abbey of Newark by Abbot Melvin and the Monastic Community. Br. Bruno is originally from Connecticut.  Prior to his postulancy and novitiate he taught at St. Benedict's prep and worked as a Benedictine Volunteer.

The name of Bruno was conferred upon him in honor of St. Bruno of Cologne.  St. Bruno was born in Cologne in what is today, Germany.  He studied theology and was later appointed as the Chancellor of the Diocese of Rheims, and later he was named to be appointed the bishop of Calabria.  He declined to accept the appointment.  St. Bruno went on to take a private vow denouncing secular affairs and later went on to found the Monastic Order of the Carthusians.

See more about the entrance to novitiate on our facebook page. 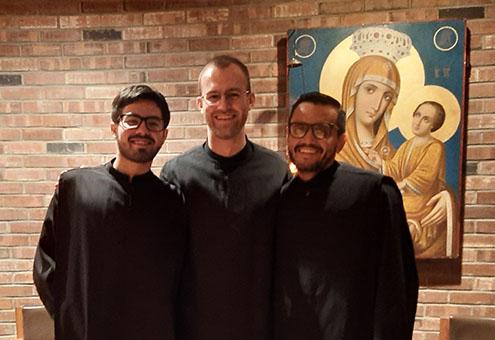