This past week (July 12th -July 19th), Br. Asiel and Br. Mark embarked on a journey to two of the other monasteries of the American – Cassinese Benedictine Congregation.  Br. Asiel traveled to St. Leo Abbey in Tampa, Florida, while Br. Mark went to St. Vincent Archabbey, in Latrobe, Pennsylvania.  The purpose of their visits to these abbeys is related to their current assignments at Newark Abbey. Among various assignments in the monastery Br. Mark and Br. Asiel both work in the tailor shop of the monastery and Br. Asiel is the Newark Abbey Director of Publicity and also works on our Social Media accounts, while Br. Mark is the Webmaster for Newark Abbey.  These common areas were the inspiration for their wanting to collaborate with individuals who fulfill these roles in other monasteries and to expand their skills and gain insights on how to build on these areas in order to benefit Newark Abbey and other monasteries of our congregation in the future. 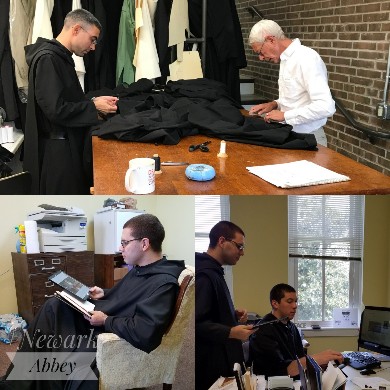 Br. Asiel has been the Abbey publicity director for over a year and has provided the community at Newark an attractive and well run social media presence on the internet which in turn has helped to provide people with a clearer idea of the day to day goings-on of the monastic community and has become a major resource for those interested in pursuing a monastic vocation in particular to Newark Abbey.

At the same time Br. Mark was responsible for building and launching the new Abbey website in May of 2019.   our social media accounts and the new website help to provide a wealth of information on Benedictine life and our particular apostolate at the Abbey.

In addition to social media development, Br. Asiel recently created a newly designed set of vocation materials including new vocation brochures and prayer cards, wrist bands, Christmas cards, pens, calendars, and other publicity tools. He was also responsible for the design and translation (into Spanish) of publicity materials for the 53rd General Chapter of the American-Cassinese Congregation of Benedictines.

On this past week’s trip to St. Leo Abbey, Br. Asiel had the opportunity to work with Br. Apollo Rodriguez, OSB who runs the social media accounts of St. Leo Abbey. The emphasis of the trip was that Br. Asiel and Br. Apollo wanted to improve their skills at things such as adding watermarks to internet images, video production, and learning more about “going live” on the internet, additions to website features, and the design of future public relations tools.  Another reason for his visit was to work with members of other houses to share resources and build relationships between our monasteries and their apostolates.  Br. Asiel and Br. Apollo met via video conferencing with monks from additional monasteries with the same purpose in mind.  Br. Asiel has mentioned that “since different communities have different resources and face different challenges, these sorts of meetings and collaborations help to bridge the gap and provide new resources and fraternal support between monasteries in an age where internet presence is increasingly vital.”

While visiting St. Vincent Archabbey, Br. Mark worked with Mr. David Seremet, the Archabbey tailor, in order to learn more advanced tailoring skills, and to begin the process of learning how to construct our monastic habit. Interestingly, Mr. Seremat’s grandfather served as one of the past tailors for the Archabbey, making such work a family tradition of sorts, and one he is enthusiastic to share. Br. Mark stated that “the purpose of the visit was two-fold; to begin learning the skills associated with making our monastic Habit and to build a relationship between those working in this area in each of the two houses”.  The work involved is a very elaborate and time-consuming process for a very complicated set of garments which although complicated have a very simple and austere appearance.  Br. Mark also said “It’s important that monks learn how to produce the habit in a way which is true to its original design –since it reminds us of our origins and the early monks of our congregation who came from the Bavarian Monastery of Metten in Germany.” The monastic habit is a clear and distinct sign of our identity and of what we are about. It often serves to draw people to us, and far from being a barrier to communication, it frequently opens up the pathway to conversation about the monastic life and our life of Christian witness. At the same time learning to produce the habit would also allow us to become more self-sufficient in terms of providing our monks habits at less cost, and without having to send out for habits in every case. Monastic tailoring is a very specialized skill and there are only a few tailors in our congregation, so gaining the skills necessary and encouraging other to learn is important. Currently the tailor at St. Vincent’s, can produce one habit in approximately three days (bearing in mind he is a professional tailor). This is, yet again, a great example of collaboration between monasteries and an effort to preserve our monastic heritage and traditions at the service of the community.

Since multiple facets of their work with publicity, the website, and the tailor shop overlap, both Br. Asiel and Br. Mark will be working together to utilize the skills they learned while visiting these diverse and special monastic communities, and will work to implement new projects at Newark Abbey in these important areas which impact the lives of the monastic community and those interested in it.